My nine year old son has taught me more about men than all of the men I have dated (and one I married), put together.

This is what he has taught me so far:

My Boy: Before I had a son, I thought that when men didn’t listen to what I was saying, that it was about me. They didn’t care, they weren’t interested.  But the older my son gets, the more I see that he is often so deeply entrenched in his thoughts, he literally doesn’t hear me speaking. And this can be anywhere – at dinner, in the car, at school, anywhere. And the critical takeaway is that it is not about me, it is the way he is wired. He’s just tuned out a lot of the time.

Men: Men are the same. And just because he doesn’t hear us the first time, doesn’t mean he’s not into us, he doesn’t care or isn’t present.Show me a woman in a relationship where her partner hears every word, and I’ll be looking at a gay woman.

My son and I at our local pizza parlour, his favourite place in the world 🙂

My Boy:Having a boy in the house, has made me realise boys just have a different relationship with sitting on the loo than we do. They sit there for a LONG time, it is where they think, zone out, and generally escape the day to day. They like sitting there.

My awareness of this fact was heightened the day we were in a Bondi cafe, and a toilet que was forming whilst people waited for my son, and when I knocked on the door insisting he come out, he said; “everyone can wait, tell them I need some space from all of these women in my life.” (Meaning me, his sister and our au-pair). Needless to say, the discussion that followed was about where it was and wasn’t appropriate for him to elongate his bathroom escapades.

Men: I have never met a man who doesn’t love sitting on the loo. A great example of accepting our men for who and what they really are & giving them space.

My Boy: My son will kick around any ball given to him, big or small. He can literally spend hours throwing and kicking balls against walls, floors, even the bathroom wall whilst sitting on the toilet. 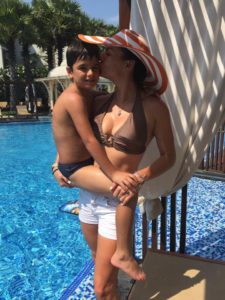 On holidays in Hua HIn.

Men: I cringe when I think of the conflicts I had with my teenage boyfriends over the hours they spent playing footy, watching mates play, or their team on TV. Seriously, sorry guys. That was me, not you with the problem.

My Boy: Men get a bad wrap when it comes to feelings, especially in dating books. But what I didn’t totally realise until I had my son is that he has a huge capacity not only to love, but to express emotion. But unlike my daughter, he does it in his own time, in his own way when it suits him. His love is not like a girl’s love.

So he can go for a few days without a hug or a kiss, but when that lighting bolt of love hits him – and it does – it’s big, it’s direct and it’s beautiful.

The other day I baked a cake for his friends, and when I brought it out to him, he was overcome with emotion and said “Mum, that is so beautiful, just like you, and I love you.” And my heart melted as my son told me he thinks I am beautiful, for the first time. Everything on the single motherhood journey was worth it in that one moment.

Men: As women, if we can tap into the capacity and desire all of the men in our lives have to truly love us, it can change our worlds and fill out hearts forever. Just don’t expect it when you want it. Let go.  It will happen when it suits them.

My Boy: It’s genetic, biological and normal. Boys sweat more than girls, and some more than others. Part of the reason is that they move fast a lot of the time and play sport every chance they get (see point 3). At 8, my son needs a shower at the end of almost every day, and throughout summer,  his hair is wet from racing around.

Men: They can’t change it, so the key is to embrace our men with their sweat, tears and time outs. And if we’re honest, a bit of sweat on the man we love can be a very sexy thing. I remember working at News Limited where a ping-pong table was installed in the office for staff (mainly males) to de-stress. Another grown up sweat box.

My Boy: My son has two places he goes to to be alone, his bed, where he usually reads or the garden. And when there, he completely zones out. He is not available for conversation, he isn’t interested in what is for dinner, and he is only interested in his own thoughts.

If I force him to do something during one if his ‘zone-outs’ (such as attend a family event that’s non-negotiable), he will if pushed, but he wont engage with people when there, he’s still in his own space. When he needs alone time, he’ll insist on it whether or not he is alone.

Men: All of those dating books that talk about not jumping on our partner for a chat the minute they get home from work are right. Men need space – a lot of it. 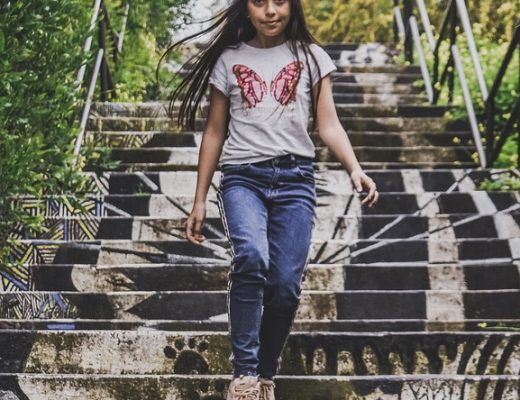 Mothers & Daughters, How To Cope With Your Teenager Beauty Tips: AHAS – What Are They? And Why Your Skin Needs One.

WHO KNEW THIS LITTLE GEM WAS HERE 💫 @goonoogoon