For a culinary experience like no other, dine deep beneath the ocean at some of the best underwater restaurants around the world.

Underwater restaurants are a niche dining experience that only an elite few get the opportunity to enjoy with the world’s first restaurant opening in 2005.

It was only this year that Europe opened its first underwater restaurant in Norway following the success of other hotspots around the world.

Here are our top 4 picks from around the world.

SEA is one of the main attractions of the five-star luxury holiday accommodation, Anantara Kihavah Villas and Resorts in the Maldives.

The resort is host to a four-in-one dining model with their restaurants SEA, SKY, FIRE and SALT.

Each restaurant is easily accessible if you are staying at the Anantara Kihavah Resort or a 20-30-minute boat trip if you are coming from a neighboring island.

The underwater restaurant SEA sits 3m below sea level on the bottom of the Indian ocean floor.

With 360 views of the sea, and hexagonal shaped mirrors on the ceilings, guests experience a completely submerged dining experience as they watch tropical fish, turtles and sharks darting past.

SEA is host to the world’s first underwater cellar, holding up to 450 labels to pick from.

In accompaniment to an array of classic international wines, their innovative menu consists of stand-out dishes such as the locally sourced Maldivian lobster medallion, pan-seared Miyazaki wagyu beef and a red mullet filet wrapped in lobster carpaccio.

The Oceanography Centre is also home to the longest underwater tunnel in Europe.

At L’oceanografic Submarino Restaurant, the aquarium window runs around the circular perimeter of the restaurant.

Guests are able to eat an exquisite meal while indulging in a floor-to-ceiling view of local sharks, rays, starfish, clownfish.

Felix Candela’s interior designs mimic life underwater through a huge display of jellyfish-inspired lighting structures that hang from the ceiling of the restaurant.

The fine-dining restaurant appeals mostly to diners with an expensive palette for fusion cooking.

Al Mahara translates to the oyster shell in Arabic.

Located in one of Dubai’s most luxurious hotels, Burj Al Arab, it is recognised as one of the greatest underwater restaurant hotspots in the world.

According to Forbes, Burj, Al Arab is the only certified 7-star hotel in the world.

Alongside the array of exquisite seafood dishes, diners will experience an extravagant sub-aquatic themed interior to complement their underwater dining experience.

The specialty of the restaurant however, lies mostly in its matchless views of the colourfully, stunning sea life on the other side of the glass window.

Under boasts being the largest underwater restaurant in the world sitting 5m below sea level.

Located in the most southern tip of Norway in Lindesnes, the restaurant’s building appears as if it is half-sunken into the sea.

With one panoramic glass wall, diners experience a meal with an ocean-view.

Depending on the time of year, guests will be able to see all types of sea creatures from crabs to seals to sea urchins and more.

The selection of fish on the menu is locally sourced and prepared by the Danish head chef Nicolai Ellitsgaard.

Ellitsgaard was formely known as the head chef of the gourmet restaurant Måltid in Kristiansand, Norway.

His vision for Under, was to create a menu that honours the high-quality seafood of Norway.

It also offers a special 18-course degustation to enjoy whilst taking in the atmosphere underwater. 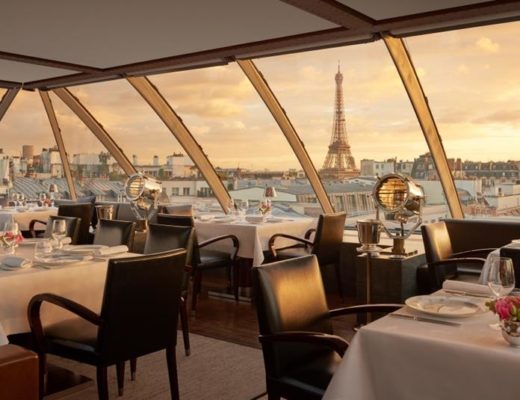